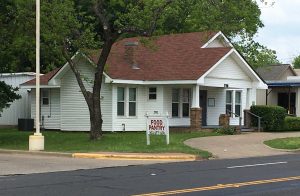 Since 1981 when the Henderson County Food Pantry was established, it has been the next thing to a lifesaver for thousands of families.

The “Food Pantry” as it is known today evolved from the Department of Human Services’ need to have a place for families to obtain immediate food, families that did not meet the qualifications to receive Human Services assistance or the benefits would be several days away. The churches were the main source to which people could turn for help. There was no control or coordination between churches over the distribution of food.

Mrs. Helen Wilbanks, Chairman of the Commissions on Social Concerns at the First Methodist Church in Athens, came to the forefront as a resource ready and willing to work with the Department of Human Services to help families who had an immediate need for food. She bought groceries and distributed them to clients. Steve Grant, representing the First Presbyterian Church, became an active participant and was instrumental in establishing the Pantry.

An 8X10 portable building, donated by Bill Adams of Adams Brothers Construction was placed on the Human Services property on North Prairieville Street. Later the operation was moved to Elliot Chevrolet’s showroom building on East Tyler Street and from there to a building on North Pinkerton. The last move was to the present location on East Corsicana when Ruby Evans donated the use of her former residence to the Food Pantry. Upon her death the property was purchased for a permanent location. 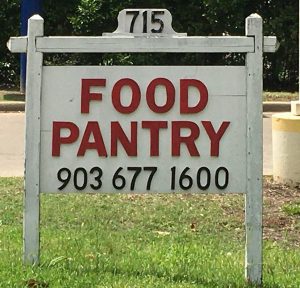 The Food Pantry is sustained by generous donations of food and money from citizens of Henderson County and two very supportive foundations, the Cain Foundation and the Ginger Murchison Foundation. All money is used to buy food, pay for maintenance, utilities and office supplies. Approximately 250 to 300 families a month are helped. Many come from as far away as Mabank and Chandler.

What really speaks well for the Food Pantry is that it is and all-volunteer organization. There are no paid employees.

Without the food drives by Postal Employees, youth groups, college students and others in the community, there would be far less food to distribute.

The demand on the Pantry, plus the great increase in food costs this past year have been such that reserve funds accumulated over the years are gone. Let me suggest that memorials or gifts honoring someone from any of you or your friends would help provide for food for some who the Pantry may not be able to accommodate otherwise.

There are 90 workers signed up on the Pantry’s roll of volunteers. They represent 72 families. This does not include the seven board members, some of whom must feel like they approach being full-time workers.